My Car is Wrecked, But not a Total Loss 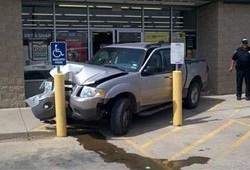 We speak to hundreds of people each day that have been in an accident and want out of their vehicle. Nobody wants a wrecked vehicle even if its repaired perfectly. Your insurance company may tell you they are responsible to repair the car to "pre-accident" condition. That is the agreement they have with you, also referred to as your insurance policy or binder. But is it really possible to "restore" a vehicle to it's pre-accident condition? Not really. Even if the vehicle is repaired with surgical precision by human hands, there will be flaws and inconsistencies. The welds won't be done by the robots at the factory and the parts won't be dipped in zinchro-metal baths…Plus, the vehicle will have accident history and the value of your vehicle will never be what it was "pre-accident".

What can you do about it? Make the most of a bad situation and be informed before you agree to the repairs. Here are three things you can do to get the most out of your auto insurance claim:

There are close to 70,000 accidents per annum on US Roads. Half of them have coverage and get repaired or totaled. Most people want "out" of their vehicle after a wreck, especially a bad one. Think about how many television ads you have to watch and how many of them are insurance companies vying for your business! Ask yourself if they would be doing that much advertising if their business was not profitable?

If you've just had an accident and you don't want to keep your car, call DamageMAX.com. We buy damaged vehicles in every state, in any condition.

For additional information please call (888) 629-2137 to speak with a live agent. We do not charge for consultations.

Coloradans will have a harder time repairing and selling totaled vehicles without harming their value and insurability under a measure that rolled through a state Senate committee with some bipartisan support Tuesday.

House Bill 1299 would remove an exemption to the state’s salvage-title law. Under that exemption, sellers of cars that are wrecked and rebuilt after they are more than six years old do not have to note that reconstruction on the cars' titles.

The measure would require salvage status to be listed on titles of all vehicles that have been damaged by collision, fire, flood, accident, trespass or other occurrence to the extent that the cost of repairing the vehicle to a roadworthy condition exceeds the vehicle’s retail fair market value just before the damage.

Members of the Senate Transportation Committee had to balance concerns about vehicle affordability with concerns about people covering up cars and trucks that may not be fit for road usage any longer.

The six-year exemption was put into state law in 1994 when many cars did not last much longer than that time frame. But the average Colorado car now is more than 11 years old, meaning a law change would affect 81 percent of vehicles being driven in the Centennial State.

If you have a damaged vehicle and don't want to repair it, keep your insurance check and sell your wrecked car or truck to DamageMAX. DamageMAX is the leading buyer of wrecked vehicles in the USA. For an immediate cash offer on any damaged or salvage title vehicle, call (888) 629-2137 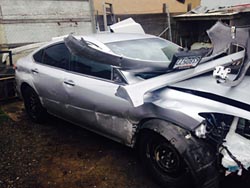 We found another state with a huge loophole for motor vehicle disaster. California isn't so golden right now for Jason P. the owner of a 2012 Mazda 6 that wrecked shortly after leaving the dealership with no auto insurance coverage. Jason called us hoping to recover the majority of the $15,000 that he owes his bank on the Mazda. Due to the severity of the damage, we were unable to get close but Jason is in a very tough spot because he cannot even sell the wrecked vehicle without the title. Since the vehicle had a lien and the bank was holding the title, Jason will have to figure out where to get the funds to repair the vehicle and keep making payments or face a repossession. What's worse yet for Jason is that the vehicle is at a storage facility accruing daily charges and he has no place to store the damage vehicle while he makes his decision.

We asked Jason if he let his insurance lapse and he indicated that he had just purchased the vehicle and was not required to have auto insurance for 30 days according to California Law. Jason took this grace period literally and left himself totally exposed. We checked for ourselves and California provides a grace period for auto insurance before vehicle registration is revoked. Click here to read more.

If you just wrecked your vehicle and you're not sure if you have coverage, call DamageMAX.com. and we will help you make the best decision, quickly. We will buy any damaged vehicle for cash and can even pay off the loan for you if you have equity.


GET A MORE PRECISE OFFER