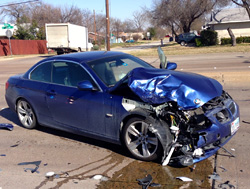 Texas! The great big state that claims to "take care of it's own"! The state where you can shoot first and ask questions later! Where else can someone shoot and kill a repossession agent in their driveway with a high powered rifle and claim "I was protecting my property"? Here is something almost as absurd…

DamageMAX found a nice little loophole in the Texas Insurance Regulations this week that allow their drivers to get hosed by insurance companies!

Sherry R. had a nice 2011 BMW 328i Convertible with low mileage. She was minding her own business when an individual blew through a red light and smashed into her pristine BMW. Sherry purchased comprehensive insurance coverage and of course had "uninsured motorist" coverage as well, but as her luck would have it she didn't have enough insurance. The individual that hit Sherry was 100% at fault and had basic liability insurance only. Because the other driver was at fault, their insurance carrier took over the settlement of Sherry's claim. What they told Sherry was shocking….while Sherry's car was a "total loss", the most that they could give her was $25,000 because that was the maximum that their policy holder had for property damage? That's right folks! Too bad on Sherry! She had a $32,000 vehicle that is a total loss that she will only get paid $25,000 for it ! To add insult to injury, this company told her that she had to pay the tow from the scene of the accident and all the storage associated with her vehicle. She even had to eat the bill for her own rental vehicle! They basically wrote her a check for $25,000 and left her to clean up the mess created by their policy holder.

DamageMAX came to her rescue and purchased her wrecked BMW for $7,000 and paid to haul it off, but Sherry lost money on the deal as she battled for 6 weeks with the responsible party's insurance carrier.

Somehow it seems wrong that her insurance company didn't see fit to make up the difference and total her car when she had premium coverage. It also seems ridiculous that the state of Texas would allow a resident of their Great State to get hosed by an insurance carrier.

If you have been in an automobile accident, and you are not sure things are going your way please call (888) 629-2137. DamageMAX.com will give you free advice on how to handle an accident claim. If we can help you out of your damaged vehicle, or even get a better settlement we will be happy to do so.

DamageMAX is the leading buyer of damaged vehicles, nationwide.


GET A MORE PRECISE OFFER